This month I was so close!  The pattern is written, knit up, tech edited and almost ready to go.  The thing is, I going to spend Halloween with the lovely Kettle Yarn Co., and October’s pattern is knit in her gorgeous yarn. I really can’t resist taking knits and camera along for a little photo shoot. It would be rude not to.

But I really couldn’t stand the fact that I am so close to actually achieving a New years resolution.  A whole year of doing what I resolved to on in those first hazy days of the year.  Only 3 months to go.  And even if I was just a couple of days late and could have overlooked the discrepancy since I am the only one keeping track, I guess I really wanted the prize for ridiculous adherence to the letter of a law I made up.  So here it is it, my pattern for Christmas in October!

The Christmas Eve Bauble is a lovely and quick knit, perfect for using up scraps of 4-ply yarn.  y. EDIT: I have found out that Rowan had discontinued yet another yarn I have in my stash. I knit up another bauble in scrapes of sock yarn and it works out just fine! Knitable in an evening (or even the night before), these baubles will deck the halls with cosy, handmade style.

US #2/2.75 mm double-pointed needles/circulars or size needed to obtain gauge.

With MC, cast on 8 sts.  Arrange sts on dpns or circular needle to join in the rnd.  Keep the cast on loose enough to accommodate the hanging attachment. PM to mark beginning of rnd.

Thread the tail through a tapestry needle and draw through the remaining sts twice. Secure top tail to make a hanging loop or weave in end.

At least I know I won’t be last minute with my November pattern! (Or will I?! It is so too early to start with the panto, I know…)

*I use a backward loop cast on as a m1–please see the abbreviations page if that isn’t a familiar one for you.

Once upon a time in a life not so far from this one, I worked for a designer who was concerned about sustainable and fair fashion. After a couple of years, she closed down her label and had to get rid of a large amount of things–equipment, fabric, supplies; there is a surprising amount of stuff that goes into running a label.

Now, it turns out that I am one of those potential hoarders.  It is not yet a Channel 4 documentary type of problem, but  I am loath to throw any perfectly good things away, and she probably knew this when she asked if I wanted anything before she disposed of it. Although I was very restrained, I ended up taking big bags of fabric, among other things, in spite of the fact that I don’t sew much, or particularly well.

There were organic cottons, jerseys, wool suiting, and one of my favorites, silk hemp.  I have always loved the silk hemp, and couldn’t let it unceremoniously go to the dump.

As I have recently been downsizing my studio, I have again come across these big bags of fabric, just laying there, mocking me. So I got them out and decided to have a look.

I was trying to think of what to do with all this fabric, when I suddenly thought- project bags!  Yes, my sewing skills can stretch to project bags! They can be simple, and useful and the sewing doesn’t have to be perfect….

And so I made one.  And it worked!

I was so pleased I decided I would use all the fabric and make loads of bags and give them to everyone I know.  Not that most people I know need or would use such a bag, but you know that excitement?  It is very like matching the perfect yarn to the perfect pattern.  Just a little everyday magic.

This would of course been a great idea if time and patience were infinite…So after getting out masses of fabric and ironing  and cutting and generally faffing around, I realized the scope of the project was going to take more time than the afternoon I had allotted to it.  I finished the bags I had started and carefully stuffed scrapes of fabric back into plastic bags and shoved plastic bags back into the nooks from whence they came. 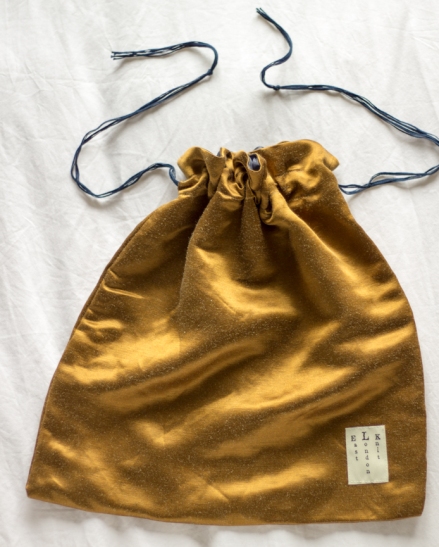 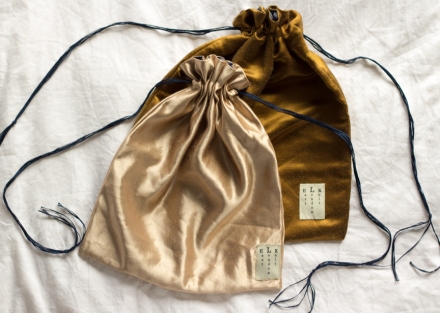 Fear not! This is no tale of woe! I quite liked the sewing and it gave me a bit of confidence to get started on some other sewing projects.  And I have a couple of nifty project bags made of my favorite hemp silk, and I will make more someday soon….

When I am more organised, I will make some more and do my first giveaway for the blog.

September’s pattern is Frost & Flame, a shawl designed to use two skeins of fingering-weight yarn, one solid and one variegated. The main body pattern is a simple brioche stitch intended to bring out the beauty of a variegated yarn as well as provide an interesting but rhythmic main stitch pattern. A lace pattern at the border compliments a solid contrast-colour and creates a delicate, frost-like finish for this crescent-shaped shawl.

After I emigrated, my parents moved out to the suburban countryside to live the good life.  It isn’t quite the middle of nowhere, especially in American terms, but is a small-town place with an abundance of dirt roads and livestock.  Downtown Seattle is around 50 minutes away if the traffic is good.  Before we arrived, I decided to do a little research and see if the Ravelry folk had any recommendations for yarn-based fun. Imagine my surprise when I received multiple hardy recommendations for Tolt Yarn and Wool, a new shop in Carnation, just a stone’s throw from my parent’s home.

I mean really great.  I went along for knit-night and it was busy and friendly.  Carnation is no metropolis, but Tolt has created a beautiful space that people are happy to travel to spend time in.

There were many of the familiar brands, no lack of European yarn, but most exciting were the many lovely local dyers and spinners I hadn’t heard of, and would like to get to know.  I bought some lovely Bumblebirch fingering-weight yarn that will becoming a shawl to reckon with soon.  Or maybe a light little cardigan.  Or maybe something else.  Bumblebirch is a Portland, OR based indie yarn dyer with a lovely range of colours and all the traditionally lux bases.

Tolt also sells some lovely own-brand notions which I couldn’t resist.  I mostly use bits of waste yarn for stitch markers, but for some reason had to have the tin of Tolt stitch markers.

So, next time you find yourself in the greater Seattle area, Tolt Yarn and Wool is my hearty recommendation.

A couple weekends ago, the second annual Great London Yarn Crawl took place, and I was lucky enough to join in the fun again.  The GLYC is a charity event in aid of Refuge, an organisation offering help and support to victims of domestic violence.

Last year I went as a volunteer leader with the wonderful Zoe Willis.  Zoe has sadly left these green and pleasant lands for the Antipodes, but writes a great blog which everyone should read about her & others’ crafting adventures.

This year, I was surprised with a ticket for the Suffolk group, and so enjoyed the leisure of being lead around London by Linda of Kettle Yarn Co., and Tom of the tokyotombola blog.

It took me a while to get going in the morning, which had nothing to do with a late dinner and the mandatory imbibing of orange wine the night before.  Nevertheless, apologies for the lateness of myself and my (blameless) travelling partner, Linda to anyone who is owed an apology….

Our first stop was Mrs. Moon in Twickenham.  And as we were really quite late, I barely managed to see all the fab yarn, such as Spud & Chloe, a wide range of Blue Sky Alpacas, and a great own-brand called Plump-a merino/baby alpaca bulky single in some bright and beautiful colors.  And I have no yarn or pics to show for it.  Boo.

Our second stop was I Knit London, a familiar favorite conveniently located in a minute from London Waterloo station.  It was a hive of activity, with the regulars in attendance, and a book signing in progress.  I even managed a blurry pic, which does no justice to the great selection of yarns, including a gorgeous own-brand I Knit or Dye, dyed in the basement of the shop. 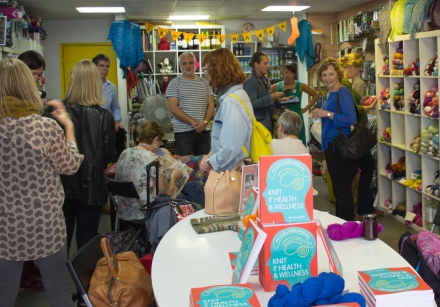 Our next stop was the Village Haberdashery, which was a bit of hit with me.  I was finally awake by the time we got there, and the shopping magic kicked in, as did the memory that I had a camera. 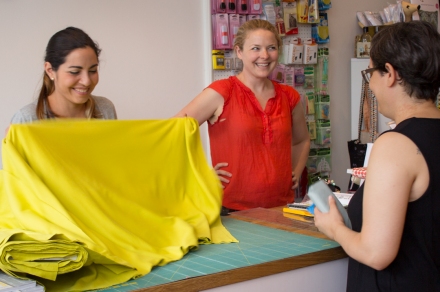 I was suddenly in love with all the colors and patterns and bought 2 patterns and fabric.  More on this later.  I hope. I am still all excited about the sewing possibilities and am hoping to have blog posts full of beautiful, *finished*, sewn objects in the near future.

I wasn’t the only one enjoying it.

A trip to Nest was next, but I think we had peaked as a group, and went instead to find somewhere to sit quietly for a while before the excitement of the Pom Pom Quarterly after party.  It’s a shame, as Nest is a lovely shop, but we just couldn’t quite manage it.  The after party was excellent, with an impressive raffle, door prizes galore and a big room full of amazing knitters.  All in all, it was a fabulous day and I am already looking forward to next September, and the 3rd annual Great London Yarn Crawl!

Get the RSS feed